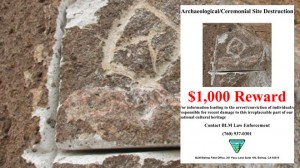 Location: Inyo County, California. It is located on Bureau of Land Management (BLM) territory and is a site listed on the National Register of Historic Places.

Who Considers it Sacred? The Bishop Paiute-Shoshone Tribe

Why is it Sacred? The volcanic cliffs are sacred because ancestors of the Paiutes and Shoshones created a vast array of petroglyphs having sacred significance and they are still used for sacred ceremonies. The site is used by elders to instruct tribal members and their children about their historical and spiritual connections to the place and to their ancestors.

Cultural History: The face of the rock cliff is covered with petroglyphs that were incised more than 3,500 years ago. The petroglyphs include images of hunters, deer and other animals along with geometric shapes.

How was the site lost? Vandalism of some of the site’s petroglyphs occurred in October of 2012. At least four petroglyphs, located fifteen feet above the ground measuring as wide as two feet, were hacked off using power saws. A fifth petroglyph was scarred by hammer blows and is also marred by saw cuts. An additional petroglyph was broken and left behind propped up against a boulder near the visitor parking lot.

What is its Status? Volunteer Site Stewards have stepped up surveillance of the site and the BLM has offered a $1,000 reward.