Significance: The mist-shrouded ruins of Machu Picchu are magical. They are one of the best-known surviving examples of Inca planning and technology nestled beside the sacred mountain of Huayna Picchu. The site is a famous example of harmonious planning with the integration of built structures into the sacred landscape. In 1983, the entire site was declared a World Heritage Site by UNESCO. UNESCO warned the Peruvian government in April that Machu Picchu will be removed from the World Heritage List if work begins on the construction of the cable car planned for the site.

Until today Machu Picchu has been a sanctuary for both body and spirit; a place to sit in contemplation and wonder at the marvels of a people who created such a place. Now the special qualities of the site are about to be thrown aside to serve corporate priorities. 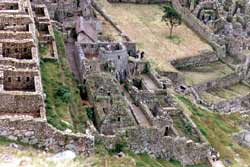 The Threat: The Peruvian government has considered providing land, selling the public railway, and allowing new hotels and a cable car in Machu Picchu to enable a private interest to exploit this historical sanctuary. This overrides Peruvian laws and International Heritage agreements.

While the original plans, as explained in a letter from UNESCO to a Sacred Sites member (the content of which has been reproduced below), as recently as August 2001 the Peruvian Minister for Tourism has spoken publicly about adding a new Cable Car Scheme to the back of the ruins. This may indicate that the Orient Express is exerting pressure on the Peruvian government. Any plan of this type is unacceptable, as Machu Picchu is a World Heritage site of a very sacred nature. Unfortunately, the new proposed plan is even worse than the original plan. The lower terminal would be located on a stretch of the river that has frequent landslides. The upper terminal, in addition, would be located within the ruins themselves.

What You Can Do To Help: We suggest you send a new round of Urgent Action Letters Immediately to

Letter from UNESCO regarding Machu Picchu

The Historic Sanctuary of Machu Picchu is a World Heritage site since 1983 for both its cultural and natural values. Since 1996 the World Heritage Committee has been discussing the deficient management arrangements for the site and the possible impact of a cable car as a means of access to the ruins. Several expert missions were sent to Peru, the most recent one in 1999 was headed by myself. Its report formed the basis for Committee’s recommendations to the Peruvian authorities. There is now a joint management unit for the park, there is a master plan and things are progressing slowly.

The government of Peru decided in May of this year [2001] to suspend the cable car project and we hope that now an in-depth study can be undertaken on the carrying capacity of the site and the best way to manage tourism.